Signs He Likes You

Trying to figure out whether a guy likes you or not can often feel like you’re playing the role of detective, digging for clues and putting puzzle pieces together. It’s incredibly frustrating at times and you do it because you want to avoid the possibility of rejection. 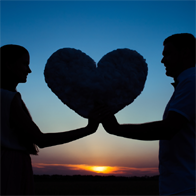 It’s natural to try and avoid rejection but it is always a possibility. Whether you ask a guy outright if he likes you or if you figure out his feelings on your own, there’s always a chance that he doesn’t like you.

However, if you want to skip asking him straight up there are a handful of signs you can look at to see if he shares your feelings. While these aren’t foolproof or hard evidence of a guy’s affection (or lack of), they are a good starting point to determine if he has any interest in you.

Before I tell you what the signs are, I need to caution you that if a guy does one or more of these actions it is not solid proof that he likes you. You cannot play detective and pull random pieces of a puzzle together to make something whole out of it.

Either he likes you and you’re reading the signs correctly, or else you are simply constructing something that isn’t real.

Overanalyzing every little thing a guy says or does is not healthy and can actually sabotage you. When you start “testing” him and playing games to see how he will react, it can backfire and actually cause him to dislike you.

The best thing that you can do for yourself is to simply assume already that he likes you. This is called a “self-fulfilling prophecy”.

What this means is that usually when you continue to think of something specific, you will end up manifesting that in your own life.

For example, if you’re constantly worried at your job about not being organized, missing deadlines, and not being friendly enough with your coworkers, then those thoughts start to come out in your actions.

You get so worried that you end up causing yourself to commit those errors and might even bring about an end to your job when you didn’t mean to. You could have avoided getting fired by switching your thinking around and focusing on the positive.

The same concept applies to dating. When you assume that you are likable, flirty, and fun to be around, that comes through in your actions and other people begin to see you like that as well.

You can use this to your advantage and just assume that a guy likes you. This doesn’t mean you start acting like his girlfriend and acting like you are already an established couple.

It simply means you can stop worrying about whether he likes you and focus more on how much fun you are having, which in turn makes him have fun in your presence.

No matter what you think, it will end up coming through in your actions so you might as well turn it into something positive that helps your chances.

With that said, you can start to observe how the guy you like acts when he is around you. There are some telltale things that guys do when they are with someone they like.

And even if a guy doesn’t display these signs, it doesn’t necessarily mean that he doesn’t like you. He might just be trying to play it cool.

Believe it or not, men are just as nervous about rejection as you are. They just do a better job of hiding their feelings sometimes but they share the same fear of getting rejected by someone they like.

So look at these examples as a jumping off point and not a checklist with a 100% accurate answer in your own situation.

One obvious sign that a guy likes you is the effort he puts into talking to you.

We all talk out of politeness at times but a guy who likes you will find excuses to strike up a conversation with you. He’ll ask you questions that he could ask anyone else. He’ll comment on mundane things simply to get the ball rolling.

When a guy doesn’t really like you he will end up answering your questions and leaving the conversation hanging. He may reply with short responses in a bored tone.

The way in which he talks to you is also an indication of his feelings for you. A lot of guys will throw some joking and teasing into the mix when they flirt.

As long as he’s not trying to be harmful and mean-spirited, you can take it as a sign that he feels comfortable pushing some of your buttons. He’s hoping to get a laugh out of you and put a smile on your face.

If he acts differently around you compared to other people, you may be onto something. Watch how friendly he is towards you and towards his own friends and other girls.

Sometimes the guy you like is just a genuinely nice, open, and friendly person. But if he goes out of his way to be nice to you or he seems to treat you differently than other girls, you should keep observing him.

You might hear from friends or other people that he’s just naturally outgoing and nice to everyone. Or you may hear that he’s been asking about you. He might be trying to avoid rejection by testing the waters through your friends.

If you find out that he’s asking if you’re single, if you’re looking for anyone, or things like what you like then there’s a good chance he likes you and wants to know more.

Finding an excuse to make physical contact with you is another sign that a guy may have more than friendly feelings for you. Anything past a friendly hug is something to watch for and pay attention to.

He might touch your arm, he might let his hug linger for an extra couple seconds, he might give you a quick neck massage. These are all little things that guys do as a means of touching you in a more-than-friendly way without (hopefully) being too aggressive.

Guys don’t go out of their way to make contact like this with girls they don’t like as more than friends. When was the last time you saw a guy do any of these things to a sister, female friend, or anyone else they don’t have a sexual interest in?

Physical contact is one of the more accurate indicators of interest from a guy that you are trying to decode. Men are pretty simple and physical attraction ranks as a top priority when they like someone so it’s hard not to test the waters with you that way if they are interested.

To wrap up, none of these signs are a 100% guarantee that a guy likes you but if he’s doing one or more of them, then there’s a good chance that he might have the same feelings for you.

Remember, the best thing you can do for yourself is to stop digging around for clues and overanalyzing every little thing. Just sit back, relax, and assume that he already does like you.

The less you focus on figuring him out and more on simply enjoying being with him, the greater the chance that he will admit any feelings he may have for you.